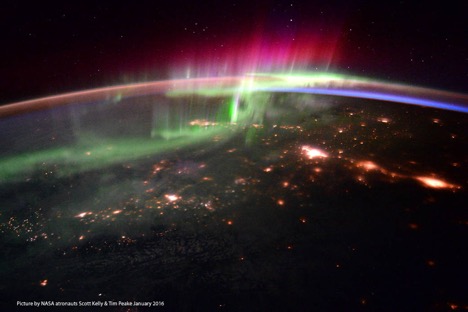 Dowsing seems to be the easiest way to literally access part of the quantum layer of existence in our realities.

The picture above was taken by NASA astronauts Scott Kelly and Tim Peake from the space station in January 2016. Most of us aren’t lucky enough to witness the amazing visual display of the aurora during our lives let alone such a dramatic display from such a remarkable viewpoint.

Dowsing can on occasion induce similar feelings of awe. Yes, seriously. Some of the experiences that I have found whilst dowsing are almost as breath-taking. They too have an ability to stop one short and even change a view of Life on earth.  OK, well, I may be taking the similarity a little far, but when one accesses and feels what can only be described as ‘angelic energy’ for the first time it is a remarkable experience and something of an emotional shock.

Dowsing is incredibly easy to do, but many people get frustrated by it because as one practices there is inevitably a phase where one’s dowsing appears to stop working and the novice dowser is left wondering why their results appear to make no sense. These are usually times when the beginner dowser has asked the same question twice and got conflicting results or they are asking a question about something in the future.

So what? Well, these two scenarios in themselves reveal something about the nature of dowsing and the power of the human mind. Firstly, they are to be welcomed, as this phase signals that you are really on the path to effective dowsing once you get past this stage. The universe is ready and willing to talk to you and take you by the hand walking with your subconscious mind via an odd set of sticks or a pendulum.

The “future” issue can be resolved by being very careful of how one phrases the question and is very specific about where the intent is aimed. The issue here is which of the almost infinite possibilities is the dowser tuning in to in the future? The future is not set in stone. Even quantum theories from the early 1900’s suggest a multi-dimensional universe full of potential. So be specific when you ask the question and “dial that code” as accurately as you can to tune in to your most appropriate reality.

Who knew quantum physics could be accessed from the comfort of your own living room!

Dowsing does seem to access the quantum world and as every dowser knows the laws of Newtonian physics don’t hold in dowsing and yet results are achievable. Witness any professional dowser as they find water, minerals or a track a travelling drugs consignment across continents. Its scientifically impossible according to Newton, but not according to the laws of quantum physics.

It seems increasingly likely that as we even access what is currently called “earth energy” we are actually accessing a part of the quantum layer of our reality. It’s possible the earth energy lines we find everywhere are actually thicker, more well defined parts of the structure of our lives.

We know earth energy responds to conscious thought. And so it should – in many ways it is conscious thought itself; a part of the Conscious Cosmos here on earth. What can we do with it? Whatever we like, is the answer. Earth energy to me is the visual representation of all self-development and manifestation in action. This is the process by which all those theories actually work. This is how you too can spend time dowsing the conscious cosmos in your own home.