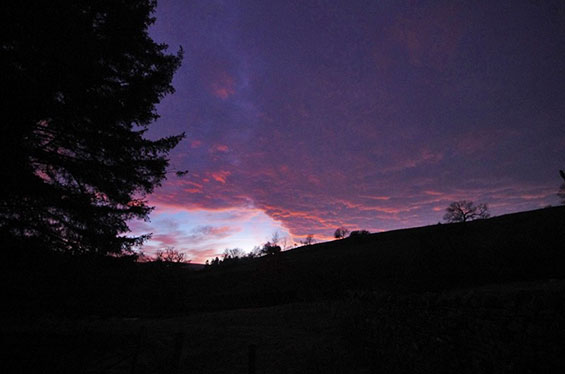 Earth optimism is a recent phrase used to counter some of the “end is nigh” thinking around what on first sight appears to be our rather hopeless current circumstance here on earth. It is also a phrase that can help us see the dawn of a new day or by ignoring it, perhaps we see only the gathering of more darkness at dusk.

Surrounded by signs of a major extinction event at the start of the Anthropocene Era humanity could be forgiven for considering our best action right now would be to find a dark room and simply wait for the inevitable apocalypse. But despite so much cause for concern over disappearing biodiversity, overwhelming population growth, deforestation, climate change and the general lack of natural resources for us all, there are also things in this world which can give us a great many reasons to feel optimistic.

“Earth Optimism” was a term coined by lecturer Nancy Knowlton at the Scripps Institution of Oceanography in California when she realised that in teaching she had become caught in a structure that in her words, was “training our students to write ever more refined obituaries for our planet”. It’s an attitude that is catching on, as Conservation Biologist, Stuart Pimm of Duke University in North Carolina explains, “There’s a lot of really good stuff going on around the world where people are working out solutions” These are solutions to help end the disastrous downward plight of so many aspects of our earth’s ecology over the previous decades. But we simply don’t hear about them on general media or broadcast news.

For instance, between 2004 and 2012 government led initiatives in Brazil cut the deforestation rates by a whopping 80 percent. The problem of deforestation is by no means “cured”, but this sort of action does now show there is a way for indigenous peoples to help manage forests as a precious world resource profitably and sustainably. If it can be done in Brazil it can be done elsewhere.

There is hope too for iconic lost environment issues such as the hole in the ozone layer at the Antarctic. This year sees the hole the smallest it’s been for some decades, brought about not only by the ban on the use of ozone-destroying chemicals but also because the warmer global temperature has raised high pressures which have pushed the hole to its smallest diameter for over a decade: Mother Earth is fighting back.

There are other examples of reasons to feel optimistic too. New species of animals and plants are being discovered all the time and the dark spectre of a globally unsustainable energy industry has turned a corner for the better. In 2016 global solar capacity jumped by a massive 25% thanks largely to falling costs of the technology and enormous expansion of green sustainable energy proliferation in China. Despite reports indicating to the contrary there are some journalists that report China itself wants to be seen as a green champion on the global political stage and is likely to soon be building the world’s most advanced completely sustainable green city.

None of this in isolation indicates we aren’t in trouble. The earth most definitely is in need of our continued help and assistance. Ironically just last night on broadcast news there was a headline that 2016 had the highest concentration of CO2 in the earth’s atmosphere ever recorded. I seem to remember that particular story largely blamed China for the global 2% increase.

So where does Earth Optimism really sit in all this?

As most of you will know, my belief system is one based upon a connection with a greater aspect of Being. By that I mean the personalities I refer to as The Management upstairs, or what most call The Universe, the Ultimate Creator, the heavenly realms. This spiritual perspective often involves looking at life symbolically to try to understand how the environment we create (our reality) reflects aspects of the self in subtle or not so subtle ways at every moment of awareness. Admittedly this can sometimes feel like shoe-horning coincidences into a container labelled “spiritual perspective” when perhaps its best to just accept the label “coincidence” and move on to avoid brain burn-out. But once one gets used to viewing life slightly differently and can start to read one’s own language within the symbols life presents to us then it is quite revealing.

Earth Optimism is a vital part of an attitude that says, it matters how we think. The phrase has come into our awareness, and therefore it has value on our life path. As humans we are co-creators of this global scene that has been in evidence to the masses for at least the last fifty or so years. It can be viewed either as horrendous without hope or with some aspects of progress towards a better future.

This world scene is the back drop to all our lives and it reflects the inner turmoil of our minds here on earth. To me the only way to solve the seeming plight of the earth is to find peace for ourselves individually. For me, the arrival into my awareness of the expression “Earth Optimism” is a sign that somewhere along the line all the changes that have been made in my personal belief system over the last ten, twenty, thirty years and in the belief systems of others that I have in my reality have started to make a difference in what we perceive around us.

More and more people seem to be finding a spiritual truth in themselves and are heading through healing towards inner balance and harmony. No matter what that belief system be based upon all spiritual viewpoints tend to reflect similar thinking and patterns of often co-operative behaviour to aim for. It will only take a proportion of the 7.5 billion souls currently on this planet to find their peace to help swing the experience of reality for all of us. By changing our own inner state of being we change what is found in our outer reality. At the moment we are presented with ever diverging extremes. That is symptomatic of change.

Once enough of us have shifted sufficiently in our inner worlds then no more will the earth be a place of lack, of constant fear, of outrageous violence. These detrimental aspects of humanity are all echoes we hold in our own personal emotional baggage. We would expect no less, being the generations receding from those ancestors that witnessed two world wars in close succession and the shedding of life on such an almighty scale of horror.

Today as the first snow of this year falls silently on the fields around my home, here in the Yorkshire Dales, I find some comfort in even having become aware of the expression “Earth Optimism”.  Of course we’ve got a long way to go, but if we focus on the positive power of change then we have hope. Earth optimism, indicates that change is happening and that change is bringing with it a new day with new opportunities, it’s up to each of us to see them for ourselves.